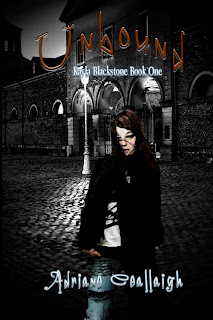 I began this book in my friends kitchen many years ago; while our children crawled around our ankles and played.  She came up with an idea for a round-robin, in our then fledgling writers group; which didn't even have a name and has since become Moses Lake Muses.
Her little character was a courier that had to deliver a box somewhere, and became a very funny little fox demon, very entertaining. That small round-robin that sits collecting dust in someones drawer-computer filing system. Inspired Kayla Blackstone and that's where the likeness stops.

This book was painful to write as some first books are where you lose, or gain your confidence as a writer. I found out may things since that October in 2006, how to be a better writer, better person, better friend, and found out to my surprise, writing wasn't as easy as I'd always thought it to be. That things like Nouns, verbs and punctuation matter, whether you have a clue what they are or not.

I've had this book edited, lost my editor, regained her only to lose her again. (Two dear friends saved it and help me finish the edit.) I've had friends read it on sentence at a time, so that this book felt as much theirs as it does mine, because they felt, or saw her grow. (not something I recommend)  I shaped, cut, rewrote, shaped, and cut some-more, and I think that my writing is better for what I've learned growing with Kayla.

She wasn't my very first attempt at writing a novel, but she was the first to keep my interest to her completion.  I learned that when I have a love interest sometimes he starts to talk in Scottish brogue... (one too many highland romance novels.) That Urban fantasy has many names and many colors. That  Conventions are fun to go to, but the writers you meet are people too and not at all what you imagined them to be in their white castles in the sky. I've learned to write a sentence... sorta.

I'm still learning, still growing and I owe allot to this little book. I hope that some of you find time to check her out... but if not, that's fine too because just seeing her there in the shelves and on amazon is something I wouldn't change for the world.
Thanks for listening,